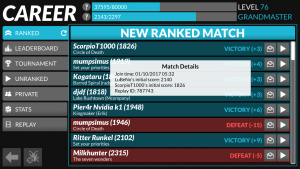 Ranked match with match details in the tooltip.

The real competition takes place in career mode. The matches between 2 players are created asynchronously

according to the matchmaking rules. Both players first need to deploy a match by assigning bot classes and programs to each bot. If both players deployed the match, the match can be watched by them. After either of the players watched the full match to the game result screen

, the reward of XP points is given to them and the league score points are exchanged between them.

You can select different game types in the career. Each one has its own purpose: 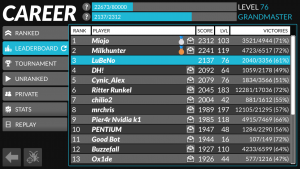 The ingame leaderboard shows the current league ranking, the league score points, the XP level and the victory ratio. The stats button opens the Gladiabots stats page in the web browser showing further information about the players and the leagues. Both leaderboards hide inactive players

For further stats there are the unofficial Gladiabots stats by MrChris.

To share a ranked, unranked, private or tournament match with friends or the community one needs to find its replay ID

. The replay ID is either accessible as tooltip by hovering or tipping on the match or it can be found on the Gladiabots stats latest matches page. This replay ID can be shared with other players.

If a player wants to watch a replay he needs to press the replay button and enter the replay ID afterwards. A replay can only be watched if the version of the game resolution engine

of the viewer matches the version of the game resolution engine of the deploying players.