The challenge is as follows: create a shotclock for counting your own shots. You can count shots exactly, or roughly; you can count them for a single bot class or for all botclasses, the freedom is yours! The most compact, clever, innovative or complete AIs will be featured on this page.

If you want to make the simplest shotclock there is, you can simply make sure that no shoot nodes are allowed to retarget. Put these in front of your attack module and you'll get a serviceable shotclock. They use the simplified model where Assault shoots for 5, Shotgun shoots for 5, Sniper shoots for 13 and Machine Gun shoots for 38. These timings tend to be "close enough" for most real-world AIs.

Here's a quick tutorial showing you how to move from simple sustain to more complicated shotclocks.

Note that these submissions were accepted as is, there might be slight errors, feel free to report them on Discord.

The Discord has a long history of making shotclocks. The first shotclock that was widely used was developed by Bockwurst, after a binary counter design by liq3, Bockwurst and Gilberreke (the game didn't have counters built in at that point). Here's the video that shows it off, for historic purposes (there were changes to the game that make this video largely obsolete now).

6 months later, with counters now available, the community set out to make the "perfect shotclock". The effort was spearheaded by Sckuzzle, Gilberreke, ThordanSsoa and many others. The result was the following compact counter: 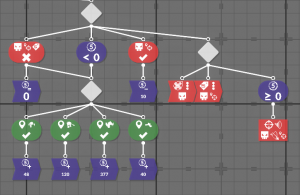 Skip forward another 6 months or so and Rainin, the best player at the time, made a video about shotcounters, showing off yet another design. This counter seems to be mostly independent, but ends up looking fairly similar.