Each player starts the game with 0 XP points, there is no possibility to lose XP points. Each ranked and unranked match in career gets rewarded with XP points. The amount of earned XP points depends on the result

, the type of the match

and the league score of your opponent at the time he joined the game.

If a player plays a ranked match against an opponent with a league score of 1020: 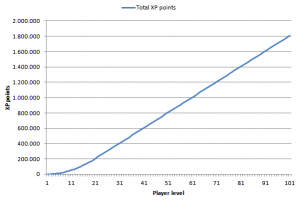 The player level is based on the XP points, each player starts at level 1. Every level needs an increasing amount of XP points to be reached.

Level up conditions are as follows: