From Gladiabots Wiki
(Redirected from Tags and Teamtags)
Jump to: navigation, search

Tags are single-character marks placed on objects on the Gladiabots arena, such as: 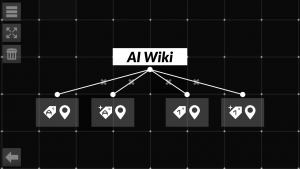 Tags (previously known as bot tags) exist as numerals, the numbers "1" through "5". They can be detected only by the bot which placed the tag.

Team tags exist as alphabets, the letters "A" through "E". They can be detected by all bots which are in the same team as the bot which placed the team tag.

The bot action tag is an action that adds a tag on one or more targets.

The bot action untag is an action that removes a tag from one or more targets.

As of Alpha 12, placing or removing a tag does not cost a tick. Thus, one can add/remove many tags, and use those tags to perform an action, all within the same tick. All tagging actions happen from left to right (in the order that they are checked). Once a tagging action is evaluated, this change is visible to all later nodes. This means that the tags a particular node sees aren't necessarily the tags which you can see.

Note: Examples are obsolete, since they don't use instant tagging.

Tagging the resource in the center can help secure a 3-2 score. 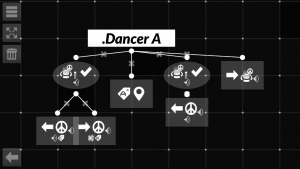 AI of bot "A" in the dance choreography

They can also be used for more complex choreography, such as: