Difference between revisions of "Leagues and league score" 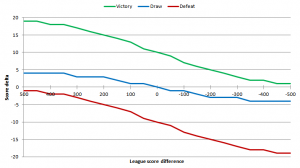 The elo rating system[1] is used for the calculation of exchanged league score points:

If a player in Silver league (K-factor 40) with a league score of 1000 points wins against an opponent with 1200 points he gets 30 points:

If the same player draws against that opponent he still gets 5 points, in case of a defeat he looses only 10 points. This example is highlighted blue in the next table.

The player league is based on the league score points, each player starts at the Bronze league. The best league currently available is the Gold league.

If a player looses a match against an opponent that has 191 league score points less, then he needs 3 victories against the same opponent to regain the lost league score points. For any known victory-defeat-draw ratio (in the previous example it is +75% -25% =0%) one could calculate the expected score difference after many games between the two opponents with the following formula (Deduction of the formula):