Gladiabots is a game between two players: the blue

side. Both players assign bot classes and programs to each bot starting on their team. Once they deploy their setup for a match, it all depends on their robots and the programs to win the match by scoring the most points. 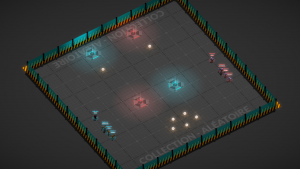 Each map contains several bot spawn points for each team. Maps also contain secondary entities, like resources, bases, force fields or health packs. The maps are procedurally (randomly) generated and have reflectional or rotational symmetry, so the setup is the same for both players, but mirrored. This way, the game is always balanced and fair. Bots are placed in the same order as they appear on the team setup screen.

In all three modes, the goal is to score more points than the opponent, but they differ in how you score those points and what extra map features are available.

The objective is to gather more resources than the other team within the time limit. Resources can be gathered by capturing them up and scoring them to an allied base; each resource scores one point. Bots respawn when destroyed in this mode.

The objective is to capture and hold more bases than the other team within the time limit. A base is captured by moving a bot into short range. Points are scored if the enemy does not recapture the base or places a bot within short range. Additional points are scored for every ally within a friendly base. Bots respawn when destroyed in this mode.

The objective is to destroy more bots than the other team within the time limit. This mode has the simplest rules, but the hardest execution. A game is evaluated as a draw if no team could destroy more bots than the other team after the time limit. The shield or health state of bots is not relevant to this objective. Destroyed bots do not respawn in this mode.

Based on the bot class all bots have a certain amount of health and shield. The shield absorbs damage before you take any damage to your health, and can regenerate after the bot isn't damaged for over 3 seconds. Any damage taken to your health is permanent. A fully destroyed shield regenerates in 3 seconds for any bot.